Listing offered by a Dealer / Broker

Since its launch, the 38ft Seawind 1160 catamaran has won a huge array of awards internationally, including “Best Multihull” Cruising World Mag 2007, “Most Innovative” Cruising World 2007, “Best Sailboat” Newport Boat Show 2006, the 2005 Australian Sailboat of the Year and many others. Over 100 Seawind 1160s have been sold all around the world due to its superior use of space and outstanding performance attributes. Seawind owners have sailed across the Pacific ocean from Australia to Alaska, via New Zealand, Tahiti and Hawaii, while other owners have cruised through SE Asia. You will also find the Seawind 1160 catamaran is a favorite in bareboat charter fleets in Australia and Thailand, yet also equally as popular as a weekender on harbors all around the world. Twin diesel inboards provide great performance.
The Seawind 1160 Deluxe also features: Resin infusion construction with hull in Vinylester. Fully moulded carbon forebeam for stiffness and Dual helm stations for max control. 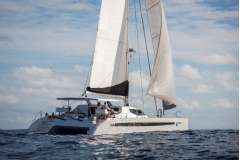 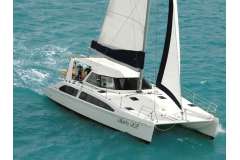 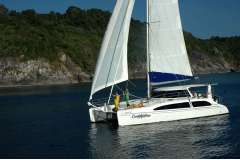